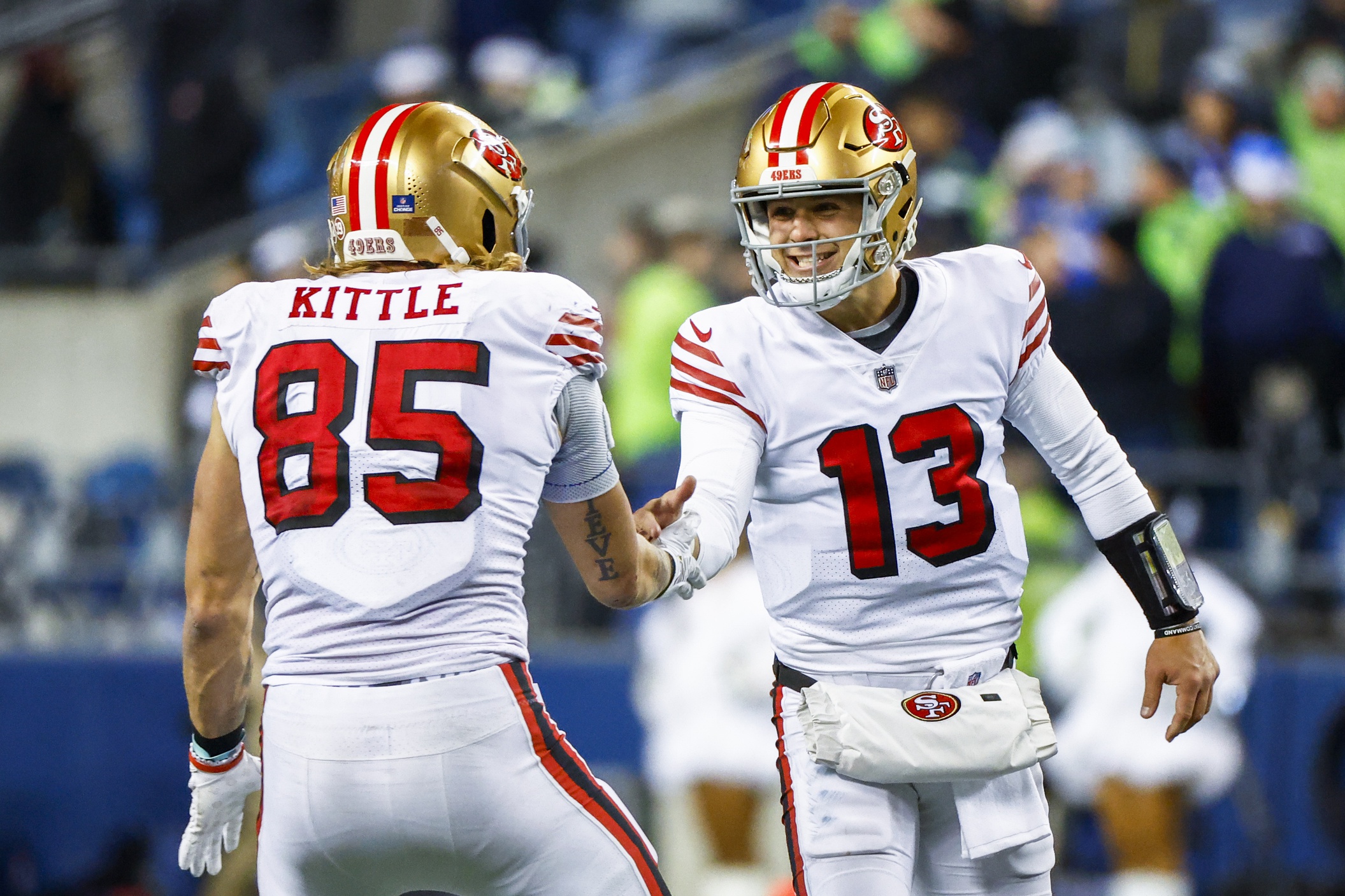 The NFC West was forecasted to be a two-horse race at the outset of the NFL betting season with the defending champion Los Angeles Rams and San Francisco 49ers expected to duke it out for bragging rights. Much like the way I attacked the NFC North futures odds in championing the Minnesota Vikings as my ride or die, I went all in on the Niners with the belief that Kyle Shanahan’s squad should’ve been installed the odds-on favorite to take it down. With PointsBet Sportsbook deeming otherwise, San Francisco offered up tons of value at the +160 rate of return. Though the Seattle Seahawks made it interesting for a while, the Niners sweeping the season rivalry last week allowed for us to cash that ticket in Week 15. Even with Brock Purdy manning the offensive ship, San Francisco is still a force to be reckoned with. That is unless the injury bug continues to take pieces away.

Let’s take a walk back memory lane and recap how our 2022 NFC West futures betting panned out!

I chuckled when bookmakers had the Rams installed favorites to win this division in back-to-back years knowing full well how improved the 49ers were going to be getting all their players back from injury. The season started off with a surprising loss to the Chicago Bears in a game the elements severely hampered as well as an ugly defeat to a Denver Broncos team that ended up being one of the biggest disappointments of the year. I screamed from the mountain tops to buy at +180 in both Weeks 2 and 4 following both defeats. It was smooth sailing from that point forward.

Jimmy Garoppolo stepped right in for the injured Trey Lance and led the team to wins in six of eight games before seeing his season come to a close in Week 13 against the Miami Dolphins. Since then, Brock Purdy helped the team lock down NFC West bragging rights for the first time since 2019 by leading the team to wins over Tampa Bay and Seattle. This team has all the necessary ingredients at hand to make a run at the Lombardi Trophy. Even with the injury bug picking off more pieces like Deebo Samuel, your futures odds portfolio should still contain pieces of the Niners winning the NFC (+300) and Super Bowl LVII (+650).

We need one more win to cash the over of their 10-game season wins total. That could occur as soon as this weekend against the Commanders. If not, at least one will be logged over the final two weeks at Las Vegas or back home against the Cardinals. I still think Philadelphia sees the No. 1 seed all the way through, so don’t go chasing that big money 16-1 score with yay too much ground needing to be made up.

The Seahawks had their shot of making the NFC West title race a bit more interesting in the Week 15 opener, but failed to come through falling 21-13 in a game that wasn’t nearly as competitive as the final eight-point spread indicates. With the loss, Seattle saw its hopes of winning the division title get squashed. Because of it, Geno Smith and co. are fighting for their playoff lives now on the outside looking into the NFC playoff picture.

I like many others had this team pegged incredibly wrong. I hit the under of their 5.5-game season wins total before Week 1 kicked off – regardless of betting them to win outright in the season opener against Denver – and then bought back in heading into Week 8 when they rattled off four straight victories. I now need Pete Carroll’s squad to rattle off three straight wins to cash in on the over of their adjusted 9.5-game wins total. They’re in Arrowhead this Saturday as near 10-point underdogs. Yup, Seattle is going to end up costing me a pretty penny in 2022-23!

This season has been an unmitigated disaster for the Cardinals. A year removed from winning 11 games and punching a ticket to the playoffs, Arizona has only tallied four wins heading into Week 16. You won’t find me fretting about that result considering I hammered the under of their 8.5-game season wins total in the offseason, but I never expected it to be this bad. DeAndre Hopkins missing the first six games due to suspension played a huge role, but so too did some horrendously bad coaching which should find Kliff Kingsbury searching for other employment come the conclusion of the regular season. With Kyler Murray entering next year off a major knee injury, I have no idea where this team is headed in the short term

The Rams had odds of winning the NFC West on the board through Week 12, but PointsBet could’ve just as easily taken them down following the Week 1 loss to the Buffalo Bills. With so many pieces to last year’s team either retired, injured, or on other teams, Los Angeles was never competing with the 49ers for division supremacy. I backed that train of thought up by hammering the under of their laughable 10.5-game season wins total and never looked back.

Heading into the Week 7 bye, LA stood 3-3 SU and 2-4 ATS with the three wins logged against the Atlanta Falcons, Arizona Cardinals, and Carolina Panthers. The writing was simply on the wall with all three of those teams currently sporting losing records. I saw right through the record on paper and hammered the “No” at +500 for the defending champs to make the playoffs. Once Matthew Stafford and Cooper Kupp succumbed to the injury bug, it was all she wrote!